Dehradun is an ideal place for people living in the city to play different types of sports. Some popular sports in Dehradun include Cricket, Football, Figure Skating and Ice Hockey. 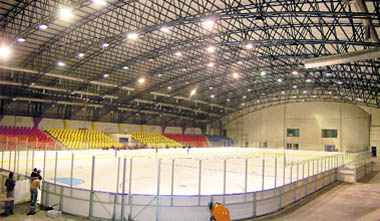 There are many sports academies in Dehradun that are famous for providing rigorous training on a range of sports such as Cricket, Football, Ice Hockey, Ice Skating, Tennis, Swimming and so on.

Dehradun is especially known for India’s first-ever artificial, Olympic sized ice skating rink in the country. Doon Ice Skating Rink is located in Maharana Pratap Sports Complex at Raipur in Dehradun District. The 60m by 30m Olympic sized rink is built indoors, in which about 100 to 150 people can skate every hour. The stadium has a seating capacity of about 3000 people. The biggest artificial ice skating rink in the country provides an opportunity for players to practice and improve their ice skating skills. Built in 2010, the ice skating rink in Dehradun meets the size requirements to host various sports like Ice Hockey, Short Track, Figure Skating, and Rink Bandy.

The Doon Ice Rink at Maharana Pratap Sports Complex has hosted many ice skating and ice hockey tournaments along with International Ice Hockey Federation’s Challenge Cup of Asia. Furthermore, Dehradun hosted the first ever South Asian Winter Games in 2011. All events related to Ice Hockey and Ice Skating, were held at Doon Ice Rink. The Raipur Sports Complex has state of the art facilities including an Olympic sized swimming pool, basketball courts and a cafeteria. The ice rink is also open to young skaters, who want to learn the sport of ice skating and ice hockey for just a small amount of registration fees of Rs. 500.

Besides Ice Skating and Ice Hockey, Dehradun is also famous for its Cricket academies. The National School of Cricket, a joint venture by Abhimanyu Cricket Academy and Asian School, is one the leading grounds for nurturing young talent in the country. Abhimanyu Cricket Academy (ACA) grounds have hosted many events like Inter State Women Competition, Scotland Under 19 and so on.

Football in Dehradun has been popular since the British period. The fame brought to Dehradun by the football teams of Doon Valley has termed this city as one of the leading football centers in India. In the year 1937, the Dehradun District Sports Association (DDSA) was formed, which started hosting a District Football League where central government institutions, local football clubs and army teams started participating. This increased the popularity of the game in the district. In 1966, the Gorkha Brigade became one the most powerful Indian Football teams when they won the Durrand Cup. From 1960 to 1972, Dehradun Football Team has constantly been in the finals of the Junior Subroto Cup, out of which they have won three tournaments in 1969, 1970 and 1972. After the exit of the Gorkha Brigades, a small team in Dehradun, Jubilant Jyoti FC, won the ‘Birthday Cup’ in Kathmandu and that was the last victory Dehradun Football Team ever had.

The District Football Association is the oldest football league in the country. Due to lack of promotions and clashes between various groups, the association has become just a memory. However, the talent exists in the city, all that is required is a simple sports environment, just like one during the Gorkha Brigade period, and the performance will just follow automatically.